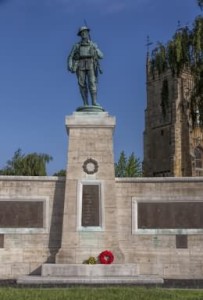 The Evesham War Memorial on the slopes of Abbey Park between the River Avon and the Bell Tower, was unveiled and dedicated by the Vicar of Evesham at 3pm on Sunday 7th August 1921 following a parade of 500 ex-servicemen along the High Street to the park. Present at the ceremony was: The Lord Lieutenant of Worcestershire, The Right Hon. The Earl of Coventry PC; The High Steward of Evesham, Commander B.M. Eyres Monsell RN, MP; Mrs Haynes-Rudge; The Lord Mayor, various town officials and over 5,000 people.

The war memorial, on a site given by the Rudge family (who once owned a large portion of the abbey estate) was designed by Mr H.E. Dicks. It is built of Cotswold stone with sculpture (a bronze figure of a soldier) by Henry Poole RA. The memorial has the date 1920 as the date of the end of the war inscribed on it. This is because the Worcestershire Regiment were sent out to Russia after the armistice where peace was not declared until 1920. The memorial was cleaned and refurbished by the Town Council with the help of the War Memorials Trust during the summer of 2014.

Amongst the men and women of both world wars commemorated on the memorial is Private 5767 William Harold Gabb who was the first soldier born in Broadway, Worcestershire, to die in the First World War. William, born in 1880, served with the 3rd Battalion Coldstream Guards and died on 7th November 1914 on the Western Front. William is also commemorated on the Ypres (Menin Gate) Memorial.

Private 19218 Richard Keyte Handy is also commemorated on the memorial. Richard was born in Broadway in 1883 and attended Broadway First School. He moved to Evesham, where he worked as a builder’s labourer, after his marriage to Sarah Ann Hartwell in 1905. Richard served with the Worcestershire Regiment and was posted to Gallipoli where he died on 4th November 1915. Richard is also commemorated on the Helles Memorial, Turkey.

Charles Hubert Keyte was born in Broadway in 1891, the youngest son of Joseph and Emma Keyte. Charles was brought up in Broadway and attended Broadway Council School. After leaving school he set up a boot repairers in the village and married Lillian Slater from Milton under Wychwood, Oxfordshire in August 1913.

Charles attested under the Derby Scheme in 1915 and was called up in April 1916. He joined the 3rd Battalion Worcestershire Regiment and was posted to the Western Front. Four months later Charles was killed in action on 22nd August 1916 whilst serving in the front line trenches before the Leipzig Salient. He is buried in Authuile Military Cemetery and commemorated on the war memorial in Broadway and the Broadway Council School Memorial Board.

Charles is one of 48 commemorated on the Broadway War Memorial. Further information about Charles and his fellow men from Broadway commemorated on the memorial can be found in ‘Broadway Remembers’ (a not-for-profit publication published to coincide with the global First World War Centenary commemorations led by IWM. Proceeds to the Poppy Appeal).

Son of Ann Keyte, a domestic servant and gloveress, Wilson William Keyte was born in Broadway in 1885 and was brought up in the village. After leaving school he worked as a grocer’s assistant in Broadway and in 1904 he married Ada Ethel Such in Chipping Norton. Wilson and Ada had three children and in the 1911 census, the family are recorded as living on Leamington Road, Broadway.

Following the outbreak of the First World War, Wilson enlisted with the Worcestershire Regiment and was posted to Macedonia with the 11th Battalion. Wilson was awarded the Military Medal in 1917 for stretcher-bearing duties during the Battle of Doiran. Two of Wilson’s cousins, Pte George Thomas Handy, 9th (Service) Battalion, and Pte Albert Henry Clarke, 11th Battalion Worcestershire Regiment, were involved in the same battle. Pte Albert Clarke² was killed in action on 24th April 1917 and Pte George Handy³ was killed instantaneously by a shell during the night of 24th/25th April 1917.

The 11th Battalion saw action in Macedonia from November 1915 until September 1918. The battalion was then posted to Bulgaria and Turkey and at the end of September 1919 was amalgamated with the 9th Battalion. After the end of the First World War, Pte Wilson Keyte was awarded the Greek Military Cross (conferred by His Majesty The King of The Hellenes)  for meritorious service in action. Wilson Keyte died, aged 64, on 5th June 1949 in Rugby, Warwickshire.

¹Supplement to the London Gazette 21st July 1919.
²Pte Albert H. Clarke is commemorated on the Doiran Memorial in the north of Greece and on the Broadway War Memorial, Broadway, Worcestershire.
³Pte George T. Handy is buried in Karasouli Military Cemetery, Polikastro, Greece.