The flowers left thick at nightfall in the wood
This Eastertide call into mind the men,
Now far from home, who, with their sweethearts, should
Have gathered them and will do never again.
by Edward Thomas (1878-1917) 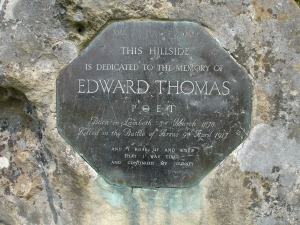 Before the First World War, war poet Edward Thomas was a prolific writer. Born in London in 1878 of Welsh parents, Thomas moved to Earlsfield, Hampshire, with his wife, Helen, after their marriage. He enlisted in the Artists Rifles (a special forces regiment of the British Army Reserve) in 1915 and was soon promoted to the rank of officer, and in November 1916 Edward was commissioned into the Royal Garrison Artillery as a Second Lieutenant.

Edward was killed in action during the Battle of Arras in 1917 and he is buried in the Military Cemetery at Agny, France. Thomas is commemorated in Poets’ Corner, Westminster Abbey, London, and by memorial windows in the churches at Steep, Hampshire, and at Eastbury, Berkshire.