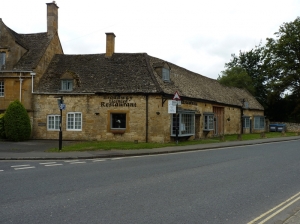 In early 1920, cinema arrived in the Cotswold village of Broadway, not in the form of a huge picture palace of the era but in a barn attached to Farnham House on the village green. Major C. Wood who lived at Farnham House at the time, established the cinema in his barn attached to the side of Farnham House opposite the Swan Hotel. Whilst the interior of the barn offered all the comforts of a cinema of the time it was hidden behind the barn’s attractive 17th century exterior. One of the first films to be shown, from 9th – 11th February was The Soul of a 75 a drama set in the First World War billed as ‘a thrilling French story of the Great War’.

It is not known when the cinema, known as the Grand Cinema, closed. Farnham House on the green  is most famous for its garden where John Singer Sargent started painting Carnation, Lily, Lily, Rose during the summer of 1884.